In 1863, traveling down the Atlantic seaboard, crossing the Isthmus of Panama on a burro, and sailing up the Pacific coast was a grueling four-month passage. Yet for Thomas Kay, a young English weaver, it was a dream come true. An old hand at sea voyages, he had already crossed the Atlantic years earlier to work at east coast textile mills. With skills honed, he was now headed to an area with ideal conditions for raising sheep and producing wool. A place with moderate weather and plentiful water – America’s newest state, Oregon.

Kay helped organize Oregon’s second woolen mill in Brownsville, where he oversaw the weaving operation. Soon he was made a superintendent of the company. In 1889, Thomas Kay opened his own mill in Salem, Oregon. From these humble beginnings rose a dyed-in-the-wool American success story.

Thomas Kay’s eldest daughter, Fannie, learned the mill business and ably assisted her father in mill operation and management. When she married retail merchant C.P. Bishop, a complementary combination of merchandising and manufacturing expertise emerged – a solid foundation for what was to become Pendleton Woolen Mills.

This dual textile-retail heritage was passed on to the three Bishop sons, Clarence, Roy and Chauncey. In 1909, with family and town backing, the Bishop sons started up an idle mill in Pendleton, Oregon.

A major railhead serving the Columbia Plateau, the town of Pendleton was a wool shipping center for sheep growers of the region. The mill, originally built in 1893, began as a wool scouring plant, which washed the raw wool before shipping. Due to increased freight tariffs on the shipment of scoured wool, the business soon became unprofitable.

In 1895, the scouring plant was enlarged and converted into a woolen mill which made bed blankets and robes for Native Americans. This venture also failed and the mill went idle. In 1909, the Bishops reopened the facility and constructed a new, more efficient mill building with aid of a local bond issue. In September of that year, the first products emerged from the new finishing department and the tradition of Pendleton Woolen Mills began.

The production of Indian blankets resumed as the Bishops applied intuitive business concepts for quality products and distinctive styling. A study of the color and design preferences of local and Southwest Native Americans resulted in vivid colors and intricate patterns. Trade expanded from the Nez Perce nation near Pendleton to the Navajo, Hopi and Zuni nations. These Pendleton blankets were used as basic wearing apparel and as a standard of value for trading and credit among Native Americans. The blankets also became prized for ceremonial use. Under the direction of the Bishop family, Pendleton expanded into other areas of woolen manufacturing. In 1912, the addition of a weaving mill in Washougal, Washington, broadened its capability for fabric variety, including suitings.

Wool shirts for men were largely utility items in the early 20th century. Drab in design and color, they were worn for warmth and protection from the elements by those who worked outdoors. Clarence Morton (C.M.) Bishop had a vision for wool shirts in vivid colors and intricate patterns. The production of woolen shirting material was a natural extension of the mill’s capabilities. In 1924, the legendary Pendleton virgin wool men’s shirt was born. By 1929, Pendleton was making a full line of men’s virgin wool sportswear.

The untimely death of his brother, Chauncey, in 1927 left C.M. Bishop with full responsibility for the management of Pendleton Woolen Mills. (Chauncey’s sons continued with the company until Robert died in 1974 and Charles Kay in 1986.) Roy Bishop had moved on to own and manage the Oregon Worsted Company in 1918. With his parent’s support, Clarence was now the guiding force of this growing enterprise.

A new thread was woven into the Pendleton corporate cloth in 1949 – womenswear manufacturing. Market research identified a need and an opportunity for branded virgin wool classic sportswear for women. Nevertheless, no one could have predicted the enormous success of a single garment introduced with the Pendleton womenswear line that year. The 49er jacket gained instant popularity. Its simple, casual styling and intrinsic value were a perfect match for the emerging suburban lifestyle of postwar America. As the apparel division thrived, Pendleton responded to consumer need for non-wool garments to complement its fine woolens coordinated within the fall and winter lines. Yet brand loyal customers wanted the same classic Pendleton look for all seasons. In 1972, Pendleton became a year-around sportswear resource, introducing distinctively styled, non-wool menswear and womenswear for spring and summer wear.

Today, their sons have assumed management roles in the company. C.M. Bishop III is president and John and Charles are vice presidents. Another son, Peter, is manager of the Catalog/Internet Division. This family thread has continued to produce Pendleton leadership with a legacy of hands-on management for six generations — warranted to be a Pendleton since 1863. 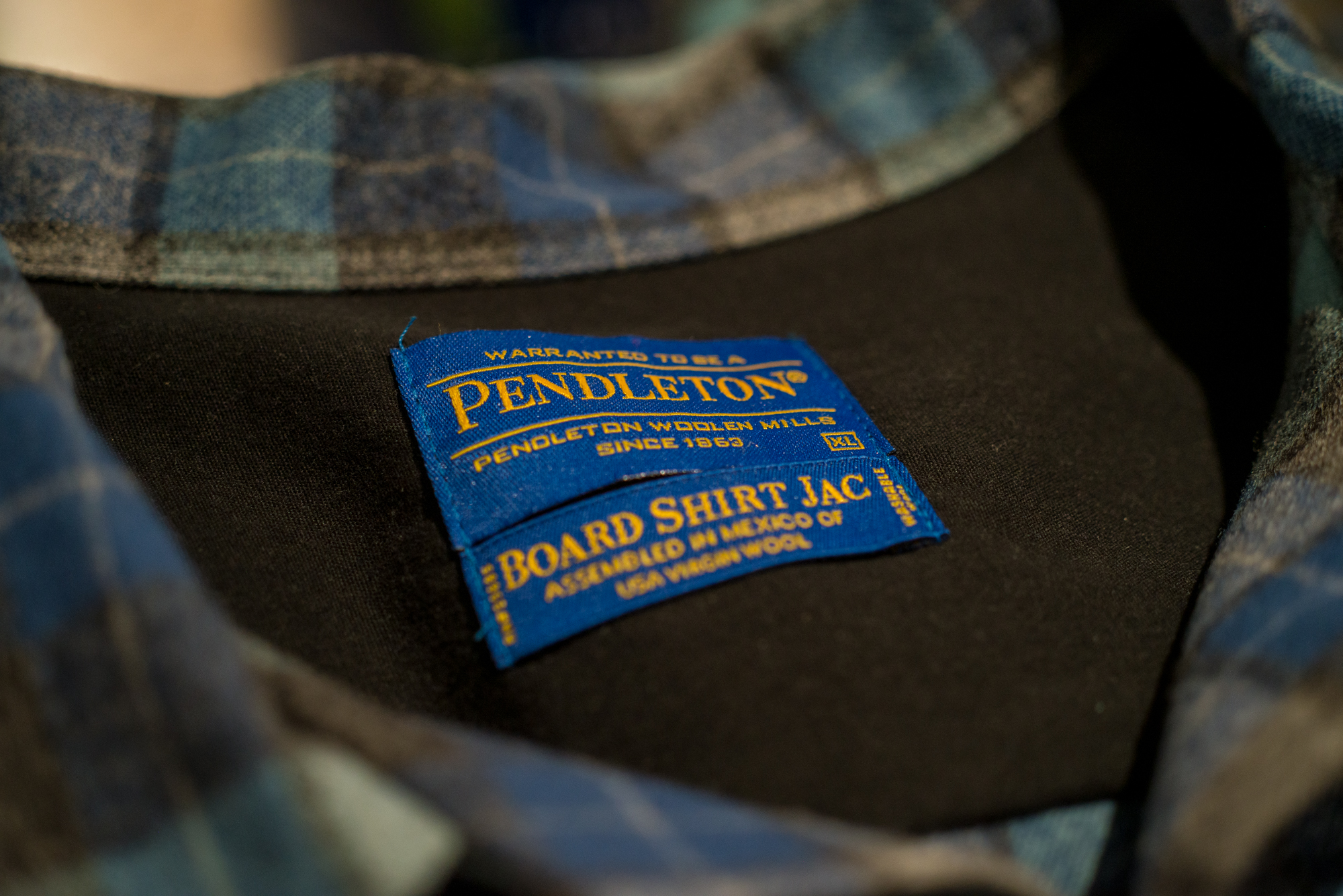